Graham Williams was born in Oxford and educated at Christ Church Cathedral School. He later went on to study at Birmingham Conservatoire, where his tutors included the late Dr. John Bishop, Joseph Weingarten and Andrew Downes. During his time in Birmingham, Graham was lay clerk at Birmingham Cathedral and on occasions at Lichfield.

He was also organist and choirmaster at West Bromwich Parish Church. After gaining his degree, Graham went on to take his teaching diploma at Birmingham University. Graham began his teaching career in Kent, moved to Derbyshire and eventually settled in Callington in 1982. He has broadcast as a freelance musician on both television and radio and is in demand as an organ teacher.

Graham founded the Callington Singers in 1983 and retired in 2019. 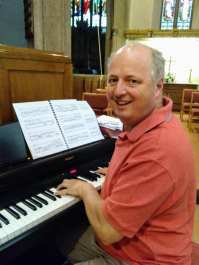 Andrew Wilson was born in Bedfordshire. He held a Junior Exhibition to Trinity College of Music, London, before proceeding to study Music at the Royal Holloway College of London University, where his teachers included Brian Dennis for composition and Martin Neary for organ.

Andrew has enjoyed a successful teaching career: for many years he was the Director of Music of Kelly College and the Kelly Choral Society but now he works mainly as a composer. His music has been published, recorded and broadcast all over the world from New York to Notre Dame Paris, Montreal, Vienna and London’s Royal Albert Hall. He is the Director of Studies of the National College of Music, London and organist of Okehampton Parish Church.

Andrew took over as Musical Director when Graham Williams retired in 2019. Andrew is no stranger to the choir, as he has accompanied them and acted as guest conductor on a number of occasions in the past. As well as choral conducting,