The second set of cartoons appeared following the 1989 Choir trip to Bindslev in Denmark. There were nine cartoons in this set entitled ‘Denmark’s Dilemmas’.

The first cartoon was inspired by Jilly’s excuse for being so late and keeping the rest of the Choir waiting in the coach to depart from Callington. She said she had set a couple of alarm clocks but they had failed to go off. 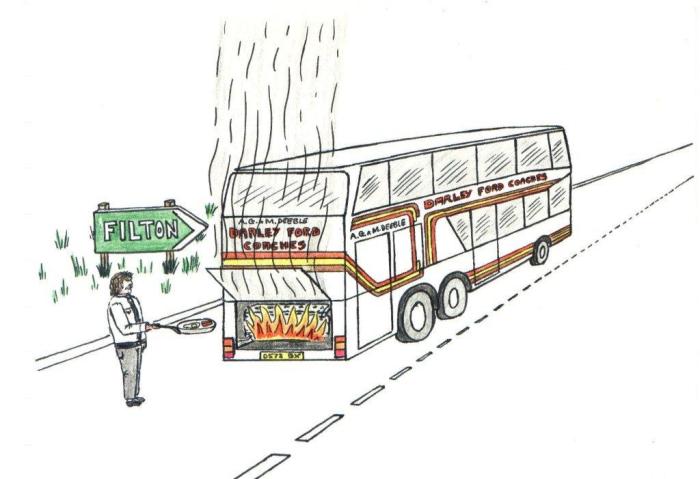 Just north of Bristol, those in the rear of the coach became aware of smoke – the engine was on fire. As it was breakfast time, and the driver seemed to be in no great rush to put it out, I imagined him to be cooking his eggs and bacon on it.

When we stopped for lunch at a Granada Service Station, there was a free-for-all over the lack of cutlery there and the resultant scrummage is depicted in the third cartoon. 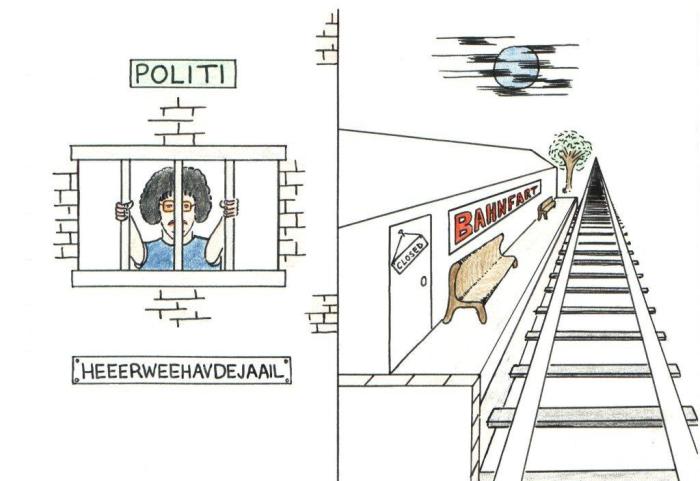 Our accompanist, Jenny, did not come on the coach but flew across later the next day. By the time she arrived, the stations were closed and the local police gave her accommodation for the night – in jail.

The fifth cartoon was self-inflicted. No-one escaped humiliation, not even me. It depicts the super heroes of the ‘morning surgery’ when Debby cured all ailments known to medical science and I sorted out everybody’s photographic problems.

The sixth cartoon shows us deep in a Danish forest, going completely the wrong way on tracks never intended for a double-decker coach and pushing between the densely planted spruce.

The seventh cartoon (and many people’s favourite) exaggerates what happened at the concert when Jenny was unable to see Graham from the organ. Peter, Jenny’s husband, had to follow Graham’s conducting and relay it from the back of the church up to the organ loft. (A video link and monitor was used on all subsequent trips).

And the final cartoon shows Graham unable to respond to the ship’s call for him to come to the lounge and conduct the Choir on the return voyage from Esbjerg. (As already related).